Life is supposed to be getting back to normal. Diaries are co-ordinated, appointments are made, meetings are set up. It’s then that the rot sets in. The delicate balancing act of pushing boundaries and challenging myself whilst allowing myself enough down time to do all the recovery I’m supposed to be doing leaves me feeling dizzy and breathless. When I make arrangements, I don’t know how I’ll feel on the day but I have to go ahead and arrange them anyway, on the off-chance. Sometimes putting one foot in front of the other is too complicated. Tomorrow is a refresher course for sitting as a magistrate and I’ve been looking forward to it. Until this evening. The reality of what it entails hits me. A whole day, starting early, rush hour tube, concentrating, asking questions, not forgetting words, being polite and sociable with strangers – it’s all very hard work. A whole day is also a lot to ask at the moment. And a day of concentrating is a very big ask. So I’ve made the decision to shelve it for the time being. I can’t sit in court and not do the people in front of me the courtesy of being up to date with the latest guidelines and able to concentrate on their cases.

While we were in the kitchen this morning, I heard a dull thud on the kitchen window and saw something out of the corner of my eye. I went outside and found a very small finch that had flown into the window. I didn’t realise they were that clean! It was obviously stunned and sat there with its head flapping about but seemed otherwise OK. It opened its beak a few times and its parents seemed to be about so we took that as a good sign. Keeping Cat no 1 inside, Mark went to pick it up and it fluttered around and then flew up to perch on a wire hanging down from the house. It was so very, very tiny. We have put fat balls in the garden to feed the birds but the pesky squirrels keep chewing through the twine and (presumably) running off with them. I would actually quite like to see that. Or are they eating them under Dog’s watchful eye? If I see any pot-bellied squirrels around I will know where they have been.

Saturday saw a girly lunch date with my friend E. Like me, she has a colourful family life and we spent time talking about the madness of parents and laughing at her Dad’s antics. After lunch, during which we eavesdropped shamelessly on the other people around us, we went to M&S where she tried on a selection of ludicrous shoes. Complete with navy blue wool socks, she tottered around on 4″ heels and complained about her bunion which she insists is hereditary. I was forbidden to try hats on. She lives in fear that I will arrive one day in a knitted monkey hat. The fact that I don’t own one (but yearn for one) doesn’t come into it. She is very strict. Over a cake at Patisserie Valerie, she was shocked to find I had always thought her a total control freak. She is. The fact that she has only just arrived at that conclusion is hilarious. Anyone who can instill such fear into a partner that he blames a dent in the flooring on the cleaner instead of owning up to it has got to be quite scary. But she is also funny and very kind, so we get along really well. And she can also do an ace impression of Mrs Overall.

So one tiring week leaches into another. Four hospital appointments in one week drain my energy reserves but there are fewer this coming week and anyway, they’re all supposed to help me feel better. Fran is coming to stay for the week which will be brilliant and I am really looking forward to it. It’s also Ollie’s birthday and we will all be together for that. But the other thing I am really looking forward to this week is singing at Maggie’s. I’ve seen some of the women since last week and know that this week is going to be even more entertaining. Yes, here comes the sun! 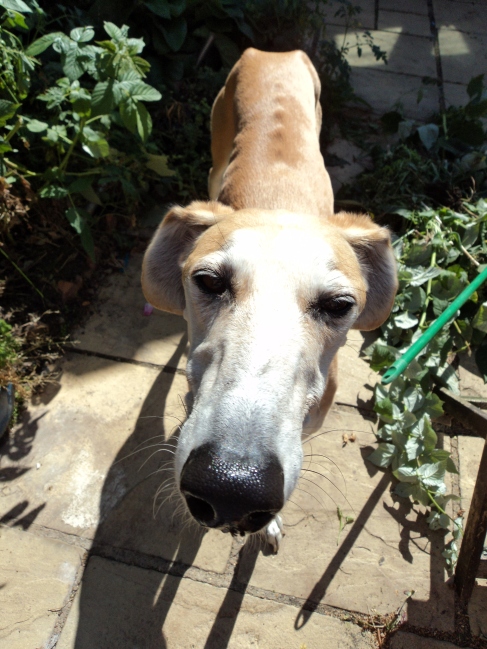 One thought on “Walking the high wire”