Sometimes things change for the better, sometimes for the worse. I am not averse to change but I don’t like the corporisation of things. Is that a word? It is now. The National Trust has spruced itself up and is now all bright and breezy and OTT and I Don’t Like It.

As part of our royal progress, we visit Berrington Hall in Herefordshire. The weather is inclement (how I love that word) and we decide being indoors for part of the day is A Good Thing. Berrington Hall is on the radar so we duly progress there. I had forgotten just how jazzy the National Trust had become. In the old days, you could go to a property and be greeted by someone who would just look at your membership card or take your money. Not so now. We are greeted by enthusiastic people who want us to discover every nook and cranny of this house. It is neo-classical inside which is not my favourite style and although there are nice rooms (and a stunning Arts and Crafts rug in the nursery – sadly too large to fit in my bag), it really isn’t my thing. This I don’t mind. I know times are hard and I am sure the NT is suffering from the economic down-turn as much as anyone but I am not 5 and I don’t need someone to point out the house (which I can see) on a map which a toddler could read. And to point it out very enthusiastically. We are sold raffle tickets and told with the income from these last year, they were able to get water plumbed into the laundry. I am wondering what happened to the original supply. Mark thinks it cost £250 all in, but I suspect there must have been digging and ripping up of floors involved.

At every twist and turn we are greeted merrily by volunteers who have clearly been told ‘Be jolly and persistent’ and they are determined to do just that. On leaving one room, half way out the door, the attendant calls out “Just look on the other side of that door and tell me what you can see”. I reluctantly close it and see it is decorated in the same style as the walls to it appears to be a secret door. He explains it couldn’t be a door because, being neo-classical, the rooms had to be symmetrical and you could not have a door opposite a window. Personally I feel you could not have a door where you did not have another door in the same wall, producing the desired symmetry and that it had nothing to do with the window. Maybe he was confusing it with Fung Shui?

In the laundry, we find a woman in a mob cap showing how hard the conditions are. We avoid her. A coach load of elderly people are watching her with suspicion in case she ropes them into some role play. We see people all over the house avoiding the volunteers, pretending to be interested in something out of the window, looking at their shoes, staring lovingly into each others’ eyes – anything but catch the attention of the resident volunteer. Standing still, I hear the volunteers repeat the same thing over and over enthusiastically, pointing out cracks in columns and other defects we would otherwise not have noticed. In the dining room, I notice the table has been set with what appear to be serving spoons on the outside of each setting. I would quite like to know why and whether it was to serve oneself or whether the people who lived in the house just had huge mouths but I am afraid to ask as I fear it will lead to a lot of information I really don’t want. 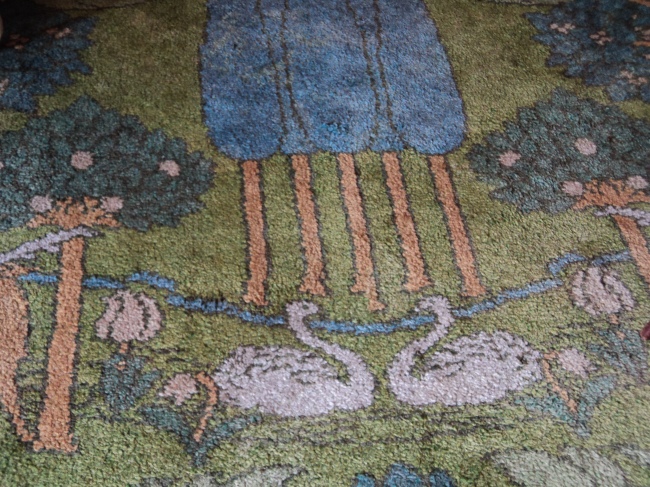 The volunteers were nice but their persistence was wearing. It would have been really good if they had been told to offer information but to notice when it was unwanted. Maybe that was too complicated and it’s easier to say “Be jolly and persistent”.