Through some clever manipulation, Mr Mason and I manage to arrange our week so that we can go to the Lincolnshire show. I love County shows. The week doesn’t start well with Lark coming into season. At first I think she has cut her paw (D’oh!) because she leaves a red bloody mark on my night dress but then, upon investigation and an email to her breeder, we are sure that is what has happened (coming into season not a cut paw). What do we do? We have never been in this situation before. I have a mental picture of all male dogs in East Lindsey rushing towards her and getting to our garden all at the same time. There are dire warnings on the internet and I suddenly feel very protective of my little pup who has no idea what is going on and still enjoys chasing a fluffy bunny and a screeching monkey around the garden. Should I be on one of those Channel 5 programmes as a bad mother? Probably not, I remind myself, she is a dog. Mr Mason and I trawl the charity shops in Horncastle to find suitable garments for her nether regions to keep the house reasonably clean. The first item I find is a pair of Superman shorts. It’s very difficult trying to size up an 11 month old whippet and compare it to a 3 or 4 year old child. At 99p I decide to take the risk but the woman at the counter undoes my subterfuge. “Going for a swim, are  you?” she asks. Now I can either grow the lie or just take it on the chin. “Actually they’re for my dog. She’s come into season today.” The assistant hoots with laughter and can still be heard as we go into the next charity shop two doors down. In the supermarket, I think I have cracked it. A pair of Swimmers! Nappy-type pants for kids who want to go in the water but can’t resist leaving a surprise. Again, the sizing catches me out. Helpfully, someone has opened a packet of the size I think would be right but it seems much too small to me so I buy the bigger size. Getting her into them is another job. She doesn’t mind too much but can’t resist chewing at the tapes so in the end I have to take a roll of sellotape and tape her in. Of course, when Mr Mason takes them off her later (yes, it was always going to be his job), there is a poo in it and I’m not sure who is more surprised.

On our way to the Lincolnshire Show the following day, armed with dire warnings of horrendous traffic jams, we see a rather chubby woman wearing a t-shirt with the slogan PUGS NOT DRUGS! It teams well with her tracksuit bottoms and slippers but we can’t quite get our heads around the slogan and so then make up rude and politically incorrect versions of our own as well as some equally perplexing ones to match the original. FEET NOT MEAT! PENS NOT HENS! You can take it from here. Getting into the show is a breeze. We are shown to the Disabled parking area which is very close to the entrance and then walk through with our pre-printed tickets. Lark is worried by the traction engines but both dogs enjoy the show jumping. They seem fairly relaxed although will not take food or drink from anyone except me and even then, Dog needs lots of coaxing. We find places to sit when we need them, buy some fabulous cheeses, smoked garlic salt, a hat, a wonderful walnut sourdough bread and a pair of ratcheted extendable loppers for Mr Mason who is very excited by this purchase. We go to see the pigs and sheep (PIGS NOT WIGS!) and then find out afterwards that dogs were not permitted. None of the animals seemed worried by each other and the size of both pigs and sheep was amazing. The pigs, particularly, were huge and sleepy while the sheep quietly stood guard. We left the show at around 4pm, thinking we had probably left it too late to avoid the terrible traffic but slid out of the car park easily and got home in record time. Obviously ‘terrible traffic’ in Lincolnshire means something quite different to what we are used to. I am really pleased with the way I handled the Show, managing to stumble round without falling over and being on my feet for quite some time. The weather at the Bolingbroke Mediaeval Madness a couple of days later is not so fair; in fact, it is raining. I have taken to walking Dog rather than Lark as he seems quite steady and sensible in comparison to her skipping and lurching about. Despite her size, she is quite strong, too. A sight hound is spotted at the Madness and so both dogs decide to make a break for it. Unfortunately, the new dog is downhill from us and Dog manages to pull me over completely. One minute I am upright and the next I am flat out, wondering if I have broken anything or not. Getting up is the hard and humiliating part. Complete strangers are offering to haul me to my feet and I feel disorientated and really just feel like lying there for a few moments, now that I have taken the trouble to get down there. Unfortunately this type of inactivity comes with the label of ‘slightly mad woman’ so I allow Mr Mason to haul me to my knees and then I flounder around and do the rest without looking too overwhelmed and I hurry away with Dog and apologies for my clumsiness. Being unstable does upset me, though. Sometimes I find it hard to walk in a straight line and my family is obsessed with me getting in people’s way. I often feel a firm hand in the small of my back ushering me along or being grabbed by the hand to move out of the way or cross the road. The latter move is doomed to disaster as the grabber is inevitably moving faster than me and if they persist will end up with a far more embarrassing scenario as I land flat on my face. Following the Mediaevel Madness toppling (‘toppling’ being the phrase coined by Mr Mason jnr for my many falls, including a spectacular one on the Champs Elysee for which, I suspect, i am still not forgiven), I feel exhausted and go and sit on the sofa and pretend to watch something on tv. Mr Mason goes back to see the one or two knights who have come to do battle and I don’t even realise he is gone. Apparently the knights really go at each other, dealing heavy blows as though there has been a slight disagreement over a pint of real ale earlier in the day.

And so sets in a period of extreme fatigue which is why it has taken me so long to update my blog. But the world doesn’t shut down nor does excitement and laughter which is a great part of the Mason household so I will be back before long with more tales of mayhem and destruction (and probably toppling). Enjoy a rare sighting of me in a photograh, completely unprepared and not having my photogenic body on. 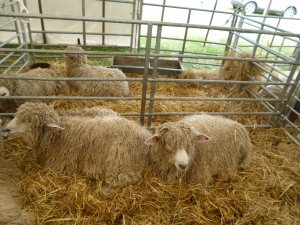 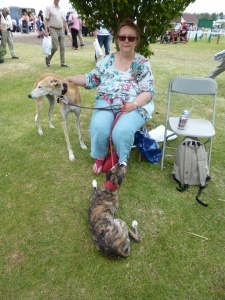