The last few days are a real mixture of emotion – contentment, excitment, fear and sadness, all rolled into one big knotted ball of wool. I think I have finally settled into this house. It’s not that I haven’t been loving it from the beginning but it’s taken a while to feel like my house rather than a nice house we’ve borrowed. As it’s our first year, there are so many things to find out about it. What grows in the garden, what to do with all the apples, where is the best wood supplier and why has our boiler gone on the blink the second we think we might want to light it? We discover we can have either constant hot water and no heating or a small amount of hot water and heating. The shower in our en-suite is electric so that’s OK but it’s a bit mean for guests who shower in the bathroom with its enormous shower, dependent on the boiler for hot water. We opt for the hot water and start using the log burner which is immediately captivating and soothing. We do runs to the local woods to pick up kindling and wait for our plumber to find a little piece of metal which will fix the boiler (we hope).

In the meantime, my speech therapy appointment rolls round and Mr Mason and I get up extra early so we can be in Lincoln at 9am. Alas, at 8.45 I get a call saying the therapist is not well so has cancelled my appointment. I really hate having very little voice and certainly little power to project it. Not being heard makes me feel diminished in some way. We go to the village hall for the Macmillan Coffee morning and sit with neighbours we don’t know very well. The noise in the hall is quite loud and clearly they are finding it hard to hear me which is frustrating and a tad boring. At the end of our conversation, the neighbour says to her husband that I have lost my voice. There is that split second choice – do I or don’t I? I’ve been so frustrated by the conversation that I do. I say “I have cancer and it presses on my vocal chords which is why I can’t speak properly”. There is the usual moment of silence with eyebrows raised and mouth turned into a perfect O before she finds her own voice and commiserates with me. That is the end of the conversation, though. I’m hard work sometimes.

We have Mr and Mrs Palmer to stay overnight. Mrs Palmer and I were at school together so we go back a fair way. She is something of a superhero as she singlehandedly steered a speeding RV, driven by Mr Palmer who was having an absence at the time, safely to the side of the road in Canada, not hitting any other vehicles and preserving life and limb all round. They bring us a beautiful handmade sign for the house, amongst a treasure trove of other things, loving made and we take them to see the tiger who lays eggs. Then into Horncastle where we attempt, for the umpteenth time, to see the church but it is locked. From memory, I believe there are farming implements from the Peasant’s Revolt hanging in the church but the vicar clearly doesn’t want his flock wandering in at all and sundry hours. We have a pleasant evening, or so I think, ending with a takeaway of epic proportions. Once we have eaten, I feel desperate to get to bed and am graciously allowed to do so. When I look at my watch on my way upstairs, it says 8.15. Despite my love of them, I don’t think I can be called a night owl.

Mr Mason takes the dogs out into the fields around the castle the following morning and is back sooner than I expect. He says there is a fox stuck in a fence and is going to call the RSPCA. I find the number and he duly calls, looking crosser by the minute. By the time he gets through to a real person, they sound no better than the automated system, asking him repeatedly where he lives, how long ago he saw the fox and whether he has clean underpants on (I made that bit up). I decide I will walk over to see for myself and find 3 women from Spilsby on a day out who have also come across the fox. They go through the same routine with the RSPCA and meanwhile the fox pants, struggles a little and looks thoroughly miserable and frightened, despite our soft and soothing words. When the RSPCA inspector arrives, she brings the tiniest pair of scissors in the world attached to a Swiss Army knife and then berates us because “no-one told us it was a wire fence”. Mr Mason arrives and duly sets off for a house where there are builders working, hoping they will have a wire cutter. Meanwhile the inspector loops a restrainer around the fox’s neck and pokes it about a bit. She clearly just wants to let the fox go whereas the gathering group want it to be seen by a vet. She tells us it hasn’t been there long as its foot is still warm (it is so hot people are mopping their faces with handkerchiefs) and that it is a big fox and quite old. With my experience of urban foxes, I would say it is a young fox, either a vixen or a small male. I have no idea how long it’s been strung up there but I would guess a few hours as it’s now 1pm and foxes generally like to skulk about when there is no-one else around. Mr Mason brings 2 hefty workmen back with him and, despite their earlier conversation during which they say they will be happy to despatch a fox, they treat it very gently and carefully cut the wire away, helping the inspector put the fox into what she calls a ‘crush cage’ but which is labelled ‘small cat box’ making me think she’s brought entirely the wrong equipment. The fox is duly hauled away, hopefully to the vet and not just half a mile down the road. 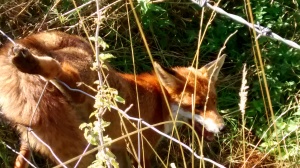 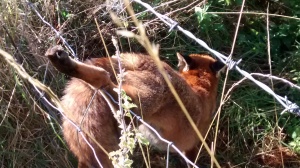 And on a warm Thursday, Mr Mason and I get up at 5 and set out for London with Dog and Lark in the back of the car. The traffic is OK until we hit the outskirts and then we just run into the normal choked-up roadways which we miss not even a little. We head for Maggie’s, one of our favourite haunts, filled with warm memories and good friends. Ms de Roeck and Ms Marsden are there, both looking as lovely as ever and we exchange hugs, squeezes and kisses. We sit for a short while, talking and laughing and then head on out. Ms de Roeck has to go to work but Ms Marsden jumps in the car with us, the back seat filled with dog food, gifts and snacks to keep Mr Mason going. One day she will find the back seat empty and pristine. The last time she was with us she was wedged between Ms Howard and a tyre. It’s a long story. We head off to see Ms Baranska who has not been doing so well over the last weeks and who we have been desperate to see. We bring Patisserie Valerie cakes, Jelly Babies, elderflower cordial and maybe other things that I’ve forgotten. She is in great pain moving around which is distressing to see. Her mum, not speaking any English, still talks to us, smiling through her immense pain in looking after her daughter. How can I describe Ms Baranska? Physically she is just stunning to look at; perfect cheekbones in a model’s face with a smile that would light up any room. When you talk, she listens, she concentrates, she understands. She is kind, witty, funny, well-read, cheeky and beautiful inside and out. Ah yes, and she is just a year older than my daughter. I fell in love with her when I first met her. She is someone you want to be friends with because she is just lovely. She makes me laugh when she tells me she has been swearing a lot since she was diagnosed with secondary cancer of an unknown origin, choosing specific words to describe it, not just random swearing.  We talk, drink tea and Ms Marsden, Mr Mason and I eat cake. We hold hands, I cry, we talk about the important stuff, the down-to-the-wire, nitty-gritty, downright unpleasant stuff and it breaks my heart to see her so ill and uncomfortable. We are all entranced by a hanging over the stairwell which consists of 1000 origami cranes in lots of different colours and patterns, strung together in a rainbow waterfall. Ms Baranska tells us it was a project created by her family. They all made lots and lots of cranes and she would receive envelopes from family and close friends stuffed with cranes to add. She and her sister strung them together and her partner made a frame to hand them from. It really is stunning. After an hour or so, we can see she is getting tired and, despite her protestations, we get up to leave which is a hard thing to do. For some reason I cannot bring myself to take a photograph of her but I do take one of her cat who appears to have a huge smile on his face. And living with Ms Baranska, who wouldn’t have a smile on their face?

One thought on “Bitter-sweet symphony”