We have had a lovely couple of days.

We have been to a bee-whisperer’s wedding. We drive to Chester to stay with our friends R and P and meet their daughter and granddaughters. It is a happy meeting and immediately Dog realises he has foundnew playmates who will throw a ball endlessly and adore him. We sleep in the conservatory, cosy underneath a glass roof and an amazing bougainvillea in full bloom. The wedding morning dawns and Mark, Dog and the groom leave to go and get themselves spruced up. My wedding breakfast is a pain au chocolat and a cup of coffee in my garden boudoir while small girls peep through the curtain that separates us from the house in case Dog is up and wanting to play. Of course he is but is then whisked away with the boys. The bride makes an appearance and looks simply stunning. She is radiant with happiness and absolutely beautiful.

The service is short but quite emotional. I ensure I take photos while they exchange vows and see a tear glistening in the bride’s eye as she hears her bridegroom solemnly read his vows. Later confetti is thrown around liberally and we go back to find the wonderful feast their friends have prepared in our absence. Dog sits in the car awhile to save him from being at nose height to a table groaning with amazing food. Later he re-joins us to be fed copious sausage rolls by the small girls.

During an interlude in the proceedings, P, the groom says to one of the girls “Would you like to see my bee collection?” Not an everyday phrase, I think you will agree. He tells her to open a small wooden box which we find contains the bodies of dead bees. He doesnt like to leave them lying aound and I wish I could remember or invent his exact reason for doing it but I can’t. I’m sure it honours the majorly important bee in some way. It is also very touching to see this moment between the two of them and how the child doesn’t bat an eyelid at this offer.

I wish all happiness to the bee whisperer and his wife.

Our break (or Royal Progress, for those following this blog) is going well, apart from torrential rain and high winds yesterday. We slop around various pretty towns, pretending it isn’t really raining hard but when Dog refuses to get out of the car, we know it is pretty bad weather. And it is really cold, unseasonably so for May. We decide to call it a day mid-way through the afternoon with just one final stop for the day. Dunkerton’s Cider Mill http://dunkertons.co.uk/.

As we get out of the car, another couple with 2 dogs are trying to encourage them out of their car. They smil wanly (the couple, not the dogs) and vainly try to look as though they are firmly in control. Their dogs need to wee and so does Dog but he can’t go when other dogs are watching unless their heads are actually underneath him when he has no problem in piddling on their heads. I decide to leave the dog-wrangling to the experts and, throwing myself into the wind, drip off towards the Cider Mill. Once inside, we are greeted by an elderly couple who shout “There you are!” as though they have been waiting for us. They focus properly and then the man declares “It’s not you!” which is quite hard to answer. Mark says “It is me but not the me you’re expecting” and we leave it at that. I fall twice into the shallow trough running the length of the floor. The first time I do it, the Cider Mill Man says “Mind the trough” as though I haven’t just fallen in it.

The range of ciders and perry they have is quite outstanding for such a small enterprise and everything appears to be organic which is even better. We have already sampled one of the ciders before so choose a variety of other bottles, causing chaos by choosing one lot and then going back and doubling up our order. The Cider Mill Man jots it all down on a pad and adds it up manually, despite our disorganisation. We all agree it is very, very cold and compare how cold our hands are.

The worrying part to this is how it may affect their business and agriculture in general. The apple blossom should be out already but the weather has been so bad this spring, Cider Mill Man estimates they are a month behind. With the warm weather earlier in the week, they are now worried the blossom will emerge and be battered by the strong winds before it has time to be pollinated. And the bees are another cause for concern. Even in the last week when there have been hotter days, CMM says he has seen very few bees flying. They have 30 acres of trees and I seem to remember a similar number of hives but he worries that their bee population, despite constant feeding over the winter, has been decimated. And if the weather doesn’t improve, the trees don’t blossom at the right time and the bees don’t do their jobs, there are serious implications for their business. They can only turn what they grow into cider. It’s a real worry and as we leave a cheerful-but-worried CMM, I vow never to buy F1 flowers for the garden again. Radio 4 told me they have been so refined in their production that some of them now have no pollen at all. We could let the garden go wild and allow the bees free rein but I fear it won’t help CMM.

Energy levels continue to be a problem as is pain in my back, knees, legs, shoulders, arms – well, everywhere. I am doing well and walking every day but I am feeling more and more exhausted. It is frustrating because I want to be able to do what I did before the demon cancer came into my life and it’s just not happening. I am doing well but just not well enough for me. Next week’s diary is looking like a minefield of appointments and meetings and already I am worrying about it. What did I say about taking on less? I have to clear my diary around Race For Life in June or I will never make 10k and I really, really want to. My scar is still not healed and that’s from 3rd August last year. This is probably having a draining effect on my energy, too. I have tried manuka honey dressings most recently which haven’t worked their magic. I did wonder, when wearing one, whether bees would suddenly find me more attractive and swarm but this hasn’t happened. Someone else suggested wasps might find me really unattractive which is an altogether more horrid prospect but again, thankfully, this hasn’t happened. I hate how I have to push to get someone interested in my on-going health. I emailed my breast care nurse asking to see the new lymphodoema specialist who has recently joined the team and sending her an interesting article about weight training preventing lymphodoema. She does not appear to have read the article when she replies and, yet again, I am told she will get back to me about seeing the new nurse as she is ‘overhwelmed’. It’s not her fault. Funds are being stripped out everywhere and I imagine there are loads of us with fat arms waiting to descend on her. My new sleeve has not arrived yet, either, so I have been wandering around fat-handed, occasionally holding my arm up in the air to the alarm of passers-by who worry I am trying to attract their attention. Maybe if I waved it at the new lymphodoema nurse she’d give me an appointment.

Where we are staying…. 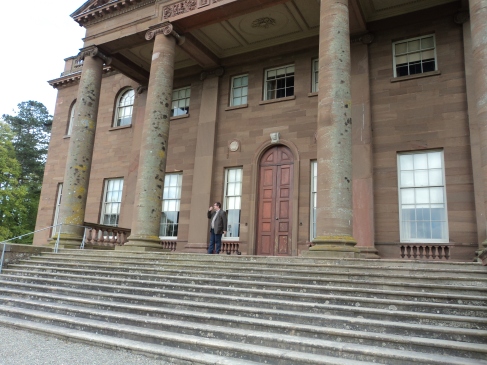