The last few weeks are full and busy. We have visitors who arrive laden with chocolates, flowers, presents for the dogs and, more importantly, themselves to entertain us. No-one minds when I drag myself off to bed early and don’t over indulge in wine. We take a trip to Chester to see our dear friends Mr and Mrs Hurley, she who has been to hell and back with treatment and an incredibly long hospital stay. As we arrive, I am grabbed and hugged and sobbed over, so intense is the emotion. It is truly wonderful to see them both looking so well and before we know it we have been talking for 4 hours and Mrs Hurley is looking decidedly tired. It’s a real frustration – you look forward to seeing people so much and then after a while you can’t even hear what they are saying, the tiredness which overwhelms you is so great. And yet you don’t want them to go. I don’t want to leave, either, but we have a long drive home so we need to go. They are tolerant with Lark who manages to sneak upstairs and carefully remove a small bear which takes her fancy. She takes it into the garden to chew and throw around and they still smile fondly even though I suspect they would like to throttle her at that moment. The sausage she buries carefully under the bush is dug out and given quietly to Dog who doesn’t mind the dirt. The journey home is excrutiating and I am in pain which I can’t shift. It is such a relief to see our gate and tumble into bed.

Saturday sees the sun shine and the Old Bolingbroke Village Fete. It really is like an episode of Midsomer Murders. Held in someone’s garden, we turn up to see how many people we now know and it’s a pleasant surprise. Those who do know us say hello and those who don’t also say hello and introduce themselves. I meet our next door neighbour for the first time, thus puttting to bed the rumour that I don’t really exist or that I am a Mrs Rochester-type character. I meet people’s wives for the first time and feel we’re starting to become known which is very nice. There is a tea tent with home-made cakes, a home-made cake stall which is laden with fabulous creations. Someone tells us there are mostly one or two people who create all these comestibles and there is a rumour that Doug who used to live in our house has bought a cake made by me. But it’s false – I haven’t made anything but next year I just might. There are a couple of very sad tombola stalls which we feel obliged to try, winning a deodorant and some washing up liquid. There is a large game of skittles being run by the vicar who looks exactly like a Midsomer Murder vicar. He is rather portly and wears a battered straw hat. As far as I know, that is the extent of the Midsomer Murder similarity. No-one was killed by drowning in cheese (a new death designed by my friend Miss Ede and myself, following a visit to the Louth Cheese Shop) and I don’t think anyone ran off with the church money.

Our very good friend Mr Giffin comes to visit and brings his dog, Ludo, with him. Ludo is a very agreeable black labrador with an unhinged streak. Arriving late at night, Lark decides she must repel all boarders and barks herself silly, making Dog join in. She shows a very aggressive streak in defending the house and its occupants and it’s only as they are preparing to go 2 days later that she thinks she might quite like to play with Ludo after all. Dog steps up into the Top Dog role beautifully, seeing Lark’s more extreme attacks off by protecting Ludo and putting Lark’s head in his mouth at every opportunity. He is saying for all the world “This is not how we behave with guests”. Dog is much more socialised than Lark which is something we need to remedy.

House training progresses well until a wet spell of weather sends us back in time. Lark decides she cannot possibly go to the toilet outside when it is raining. I put on a coat and hat and take her outside on her lead for at least 10 minutes and she stands miserably around getting wet but doing nothing. No sooner are we back inside than she has weed on the utility room floor. Dog is clearly joining in the training effort and when she poos right in front of him in the conservatory, he barks at her to tell her it’s not on. If only he could communicate a little clearer, she would get it, I’m sure.

The district nurse comes round to check my bottom but, to my joy, it is a different nurse. I have been brooding on this problem all week and have decided to ask her to take the cushion away so there will be no need for anyone to come and examine me. This nurse is reason itself and I explain what happened last time and she rolls her eyes and says sometimes the healthcare assistants get carried away. She looks at the cushion which I tell her isn’t even very comfortable and she agrees and lets some air out. She is more than happy not to come and check me over weekly and instead we settle on a very agreeable telephone call once a month and a call from me in between if necessary. I realise how stressed I have been feeling over this issue and feel very relieved we have come to an agreement. I really don’t want to fill my week up with medical appointments which is surprisingly easy to do. Even appointments like Reiki start to come burdensome when they are tacked on to a chat with the nurse and an appointment with the physio. I would really like some days where we have absolutely nothing in the diary at all so we can just drift about and do whatever we feel like during the time I feel energetic. I have really started to notice if I miss a morphine pill. The aches and pains that come with its omission are excruciating and oral morphine doesn’t have the same effect. Fortunately the symptoms disappear once I have had 24 hours on the right medication but yes, I suppose I am now addicted to morphine. Not something I had ever expected but it has become an essential part of every day living. I also feel like raging against the unfairness of this illness, how it hits people of all kinds, young and old and, more importantly, people I love. So I am sending a huge wave of love to my friend Ms Baranska who is struggling at the moment and could do with some very positive vibes.

Living in the countryside means we see lots of animals. Some are squashed on the road but we also see the live ones, skipping along include huge hares (how lovely they will taste in the Autumn) and deer (ditto). There is an ostrich farm near us and they have a few ostriches knocking about in a field nearby, wobbling their heads and looking confused. We buy our eggs from a farm that raises turkeys, ducks, geese and all kinds of other birds. You go down a driveway and into the yard where they are all milling around happily and eventually someone comes out and sells you the most delicious fresh eggs I have ever tasted. This time, Mr Mason gets out of the car and speaks to the farmer. Then he comes to the window and says “Get out of the car! Quick! Come and see this!” He is not usually an excitable chap so I am curious as to what has got his dander up. I get out of the car and about 6 feet away, I see this. 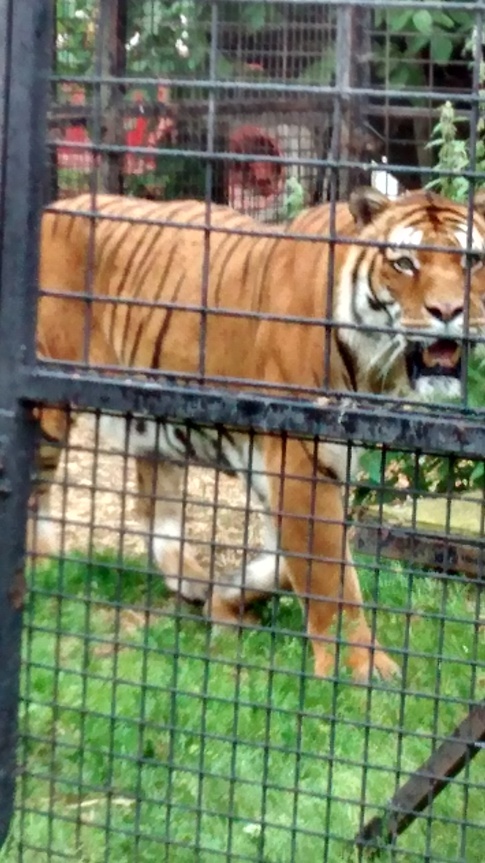 He is so close I could have touched him but I am not that simple. There is a long, complicated story behind his stint on a poultry farm but that’s for another time. The sad thing was a fox got in and killed 17 ducks so there were no duck eggs for us. Now, with a tiger in the yard, that’s one hell of a gutsy fox.