Tuesday of this week is a difficult day. As I am getting dressed, a man calls about my dishwasher. It has been playing up for some time, deciding it will not wash things properly on some occasions and on others, doing a sterling job. Putting a dishwasher cleaner in, it is found out, however, and we know it is not getting up to the right temperature. Time for a new dishwasher. I do the research and then find the model I want online. I order it and get a confirmation of both purchase and delivery. Half way into my trousers, the man calls to talk to me about my dishwasher. He waxes lyrical about what a fabulous model it is and tells me about all its features, how many place settings it can accommodate and how the delivery men are built like tanks and can move anything. This leads him into a fairly lengthy reminiscence of the fact that his parents have an American style fridge-freezer but that he does not. He is saving up for one. Well done. He eventually gets round to the ‘good news’ that we can have all our repairs done AND if it cannot be repaired, they will buy me a new machine. Jolly good. But it comes at a cost. I thought it might. We already have one year’s warranty on the machine. He says that will only cover if we have a bad machine. Bad machine? He also advises me not to take a baseball bat to the machine if it doesn’t work. This is not something I was planning to do but if he will give me his address, I will take one round to him. Eventually I persuade him that really, I am not going to take out insurance to cover something I am already insured for. I feel him slump.

Once dressed, I am off hot foot to the dentist. Some time ago I broke a tooth and my new dentist is going to fit something to cover it. Today I am prepared for her to take an impression of my tooth but not for the preparation she has to do. This involves a very painful injection into the muscle at the side of my jaw followed by a lot of drilling. I am hoping this will not leave me like a drooling fool. After this I then have the impression made which is something I hate. I am always concerned they will not be able to get the impression out and I will be stuck, gagging, while it fills my mouth. But hurrah! She can remove it, leaving me with green stuff all round my mouth. Mr Mason has come to meet me at the dentist’s surgery and we then set off for our friend Jerry’s funeral. It involves catching tubes and buses and I have not a clue where we are going so have to rely on Mr Mason who is not known for his route planning.

Sitting on the bus, 2 young men get on and sit behind me. One of them has a beautiful waxed moustache which I am longing to take a photograph of but feel shy. Their conversation revolves around which bands they like (“I’m not listening to metal any more. I’m into punk now”) and who is the best tattoo artist. The waxed moustache young man has a favourite and he does appear to be covered in them. With his moustache and slim frame, there is something very dandy-ish about him. He gets off the bus and goes straight into a tattoo parlour and I wonder if he is going to get another tattoo or just have a cup of tea with his favourite artist.

Of course, having worried about being late for Jerry’s funeral, we arrive with heaps of time to spare and sit in the garden of the crematorium reading our books and watching people arrive. Jerry has survived cancer several times before but this time it gets him good and proper. Mr Mason has known Jerry since 1971 and they still used to reminisce about their fabled World Tour which involved 4 of them driving through Europe and down to Italy one summer, the driver only having passed his test the week before. I first met Jerry in 1979 so we have a good few years of friendship between us and I know he has many friends but I am not prepared for the numbers who arrive for his funeral. It looks as though a couple of coach loads have disembarked and then people just keep arriving. There are so many, someone from the crematorium has to conduct a kind of crowd control to get people moved back so there is some room for the hearse to arrive. And still people keep arriving.

The service is very much Jerry. Some friends get up to speak about him and tell stories and it is as though he is sitting at the back with a pint in his hand, listening with a smile on his face. How he would have liked a gathering like this. We leave the chapel to the sounds of the Radetzky March and after some milling around, we find our way out and onto another bus. We are pleased to see the service for Jerry has been in such a top class establishment.

I was not aware there was a Cemetary of the Year award but there you are. This one won one. At the wake, we struggle through the crowds and I manage to find a seat where I chat to 2 lovely men from Hastings. They show me a photograph of their static caravan. There is a display of photographs of Jerry through the ages and with his many friends and there is a lot of laughter and remembering going on. As usual, pain and fatigue overwhelm me and we decide to head home, knowing that we have 3 buses to catch. On the way to the bus stop, I stop and buy some necessary restorative chocolate to see me home. Everyone on the bus behaves beautifully and we manage to synchronise ourselves so that we catch one bus seamlessly after another. I cannot claim credit for this. Standing at the bus stop, we see the most beautiful sunset.

It seems a fitting end to a difficult day. Jerry was a very good friend, a funny, intelligent man and he will be much missed by us and by hundreds of his friends. Real friends, not the Facebook kind. It was a pleasure to know you, Jerry, and we will really miss you and your dry wit. Wherever you are, I hope both the craic and the beer are good. 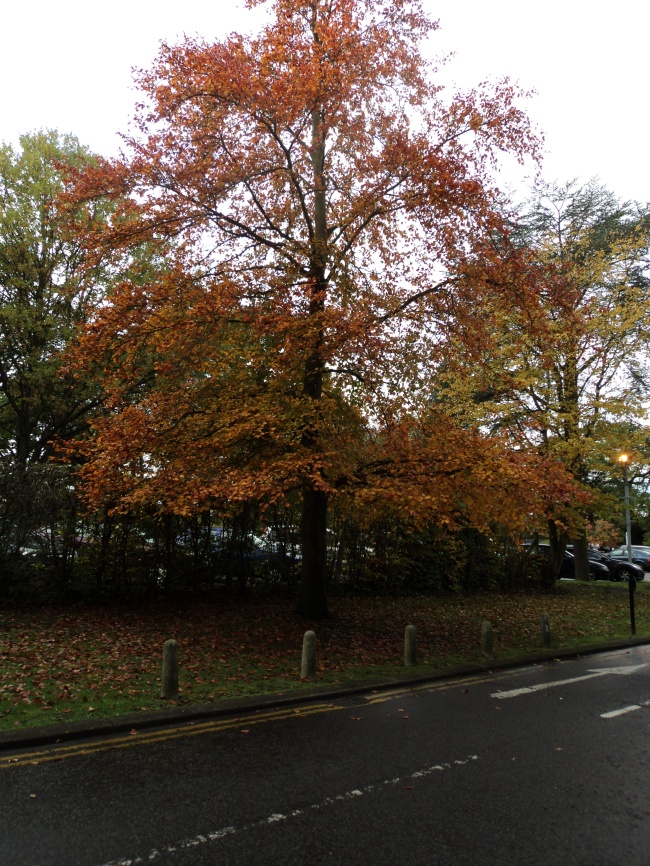