This blog has been a long time in the making. This is Mrs Safaie Jr, Shelley’s daughter and I’m taking over on the storytelling and typing today on Mum’s behalf since she is not well enough to do either at the moment. A lot has happened since Mum’s last post and I will do my best to fill in the gaps, although the storytelling might not live up to the level and wit that my mother writes with.

It all started with a bit of falling over. Mum wasn’t sure how it had happened; one moment she had been standing upright and the next she was toppling backwards and fell into the shower door, cracking the glass. She fell in front of the house on another day not long after that, the ground whizzing up out of nowhere and had to be hauled up unceremoniously by Mr Mason and a helpful neighbor.  Mum has always been a woman who falls over (famously once on holiday in Greece she turned back to us to warn us to be careful on the gravel, as mother often do, and promptly pitched forward onto her knees and cracked her kneecaps) so these recent topples didn’t seem totally out of character.

The falling over was mentioned in passing to the family GP during an appointment for a sore throat who thought it would be best for mum to speak to the oncologist, so off to Lincoln she went with Mr Mason. Mum saw a locum who performed a low-tech but effective test by moving his finger around in front of mum’s face and discovered that her field of vision was impaired. He thought that it was likely caused by metastasis in the brain but was pretty confident that it could be treated by stereotactic radiosurgery; an extremely precise radiotherapy to blast brain tumors into smithereens. Although Mum already had a brain scan scheduled a few weeks ahead, it was decided that it would be best to move it forward to take a look at what was going on, so he admitted mum and she waited overnight before having a CT and MRI scan.

The results were not what we wanted and revealed that whilst there were several blastable tumors within Mum’s brain, one in the occipital lobe had begun to creep into the lining of the brain so the precise radiotherapy was off the table.  Instead the plan was for Mum to have 5 days of whole brain radiotherapy followed by a chemo regime to be decided by her regular oncologist. The doctor giving the news said he was sorry and thought that Mum had about 3-6 months left to live with treatment. This was not only upsetting but surreal. Mum didn’t feel ill; she was tired and a bit wobbly and couldn’t remember some things, but frankly none of these were really new symptoms. After the initial shock mum and Mr Mason pushed forward with the same steely determination that has served them well these past 4 and a bit years. The hospital moved fast and began her radiotherapy on a Thursday, having a break over the weekend and starting again on Monday. I flew to the UK from Bangkok with Master Safaie on the Tuesday which was thankfully uneventful apart from an explosive poonami part way through the flight which resulted in Master Safaie’s soiled onesie being put into a biohazard bag. On Wednesday we travelled up to Lincolnshire on the train with my brother, Mr Mason Jnr. It was a beautiful sunny day and once we got home we sat out in the garden underneath the apple tree. Mum was tired and found reaching for words to be a bit tricky but she reiterated that she didn’t feel ill.

Two days later we went to the hospital for an appointment with Dr C, Mum’s oncologist. Mum was exhausted and finding it increasingly more difficult to reach for words but she powered on for the appointment. Dr C proposed that Mum go back onto Paclitaxel (the chemo she had been on before moving onto Kadcyla) and have it every week with a one week break when she would have Herceptin administered at home.  It was a positive meeting; Dr C wasn’t giving up and neither was Mum. 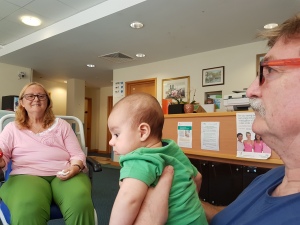 Whole brain radiotherapy is shit. Without being a targeted treatment the entire brain is nuked which although takes on the pesky cancer cells, also causes inflammation throughout the brain which brings with it a variety of scary symptoms. These get you wondering what might be down to the treatment itself and what might be caused by tumors. Mum slept entire days, waking only when we brought her food and became increasingly confused. Mr Mason, who is ever the optimist (it’s good to have one around) was hopeful that by one-week post treatment Mum would begin to feel better. In reality the effects peaked just after the 2-week mark with Mum mostly unable to communicate, feed herself or walk up the stairs. We were reassured and supported by some brilliant staff from the local hospice, her GP and Macmillan. After a slight tweak to Mum’s meds she started to perk up a bit.

With Mum feeling a little more like herself again it was time to tackle her hair. Radiotherapy to the brain also causes hair loss and although Mum had tried to reduce the impact of this by avoiding brushing her hair, after 2 weeks her hair was still falling out and what remained was looking (as Mr Mason affectionately called it) ‘a bit Trumpy’. With nobody apart from Trump himself wanting to look even remotely Trumpy, she asked me to shave her head so I got the clippers out and gave her a very short new do.

The great jumble of words has been one of the most frustrating things for Mum given that she has always been an articulate woman with a prolific talent for writing. On occasion her words come out with great clarity whilst at other times they are completely garbled. It gets interesting (and confusing) when Mum uses synonyms or words that rhyme with the word she wants to use and we play detective, desperate to understand what she wants to communicate to us. Occasionally the jumbles are entertaining in a ‘this situation seems incredibly bleak but that was still pretty funny’ kind of way. We had a terrific visit from Mum’s friends, Ms Marsden & Ms Howard who cheered Mum on as she psyched herself up to go to hospital for her first lot of chemo. On the arduous trip down the stairs with Mr Mason and myself supporting Mum, she stopped and began apologizing. Mr Mason not understanding why she had stopped or was apologizing encouraged her on when Mum said ‘No! I was trying not to walk into Hans Franz’ <translation: Fran’s hands> Mr Mason looked at me and with a gleam in his eye asked ‘Is that your German cousin by any chance?’ As it turned out we would need all the good humor we could muster as after many hours in hospital, Mum was refused treatment on the grounds that her platelets were too low. Thanks, radiotherapy, you utter bastard.

The days that followed were not pleasant. The trip out really took its toll on Mum and the decline was steep. Reality blurred with fiction and with all the confusion, expressing herself was incredibly difficult. Throughout everything she has been pain free which is a blessing and has said that she trusts us and is not frightened since we are there to guide her. We received the go ahead to increase Mum’s steroid dose in the hope that it might work on any residual inflammation around the tumors and relieve some of Mum’s symptoms. On Wednesday of this week we are due to go to Lincoln to see the oncologist to review the plan of action.  With so many twists and turns to the story so far we are not sure if Mum will be feeling well enough to go but if not then Mr Mason and either myself or Mr Mason Jr will go and speak to Dr C on her behalf.

In spite of the worrying situation this month we have managed to enjoy: 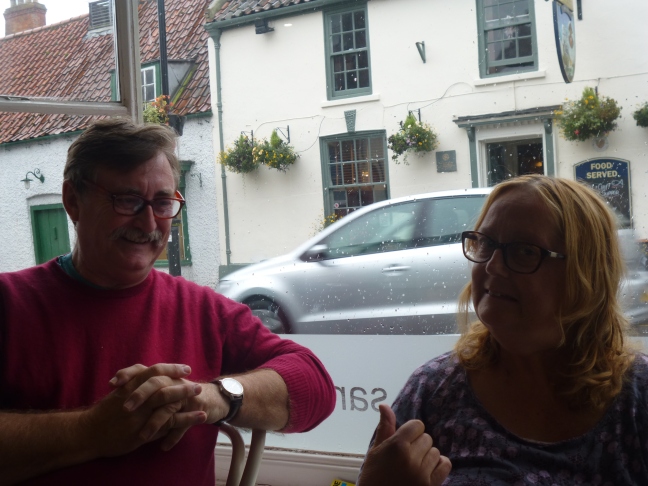 Although Mum isn’t able to use her phone or computer at the moment, she understands everything and very much enjoys it when I read out messages from people. If there’s anything you’d like me to pass onto Mum, please leave it in the comments and I’ll read it out to her. I’ll update again soon on the Mason household happenings.

15 thoughts on “My daughter’s German Cousin”